Part engineer, part musician, part poet: a focused writer, I spend my early waking hours writing stories that weave science and technology into satire and dystopia, promising readers a fun ride to somewhere or other. My characters struggle in worlds where virtual reality, biotechnology, and ecological strain collide with comedy, romance and the supernatural, with glimpses into realms barely pondered. Dare to imagine, laugh and cry! When I’m not writing, I’m either developing solar energy projects, playing guitar, hiking in the woods, or trying to convince my wife and daughter to form a metal band with me.

I write science fiction. Stories like social media-supernatural viruses getting injected into an innocent adolescent’s mind; cyborgs escaping their testing ground in Australia; an old man’s attempt to overcome his longtime wife’s death using her life-sized, speaking, mind-reading hologram; and, most notably, my two-novel story about peoples’ selfie, social media, and picture-taking infatuations causing an AI, run by a faceless corporation, to go rogue and begin purging the buildings, monuments, and people depicted in such photos, in order to balance Earth’s total carrying capacity for data storage. That last, long-winded spiel has culminated into Datapocalypse, along with its sequel, Deepfake. The short and sweet synopsis is: a story about love, too much data, and the end of the world. The what-ifs I wrangle with on a daily basis seem endless!

More about the man 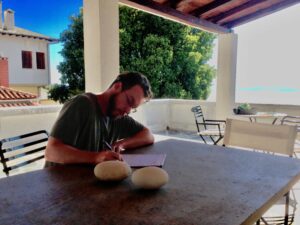 Christopher lives in Port Dover, Canada with his wife, Sarah, and daughter, Stella. There he has the space to conjure extravagant ideas and dream-up engaging characters, with a family that shims open his doors of creativity while keeping him young at heart. This lover of travel, music, philosophy, and yoga would otherwise get lost in nomadism or drinking way too much coffee; jitters rendering him much less productive. Christopher’s self-published debut novel, Datapocalypse, was released in 2020. Two of his short stories, Eye for Ego and Viralpocalypse, can be found in published online journals. Datapocalypse’s sequel, Deepfake, is less than a stone’s throw from completion and will be released soon. Advanced reader copies are available now! Also look out for future works including the short story, Sparks of Selma, and his latest novel, Beleaf.