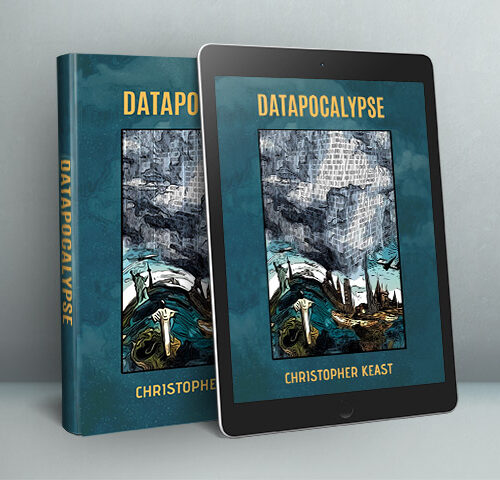 A story about love, too much data, and THE END OF THE WORLD.

In the not-so distant future, as the world’s digital freight-train plows past its Earthly limits, the world’s most reveled buildings and artifacts begin mysteriously disappearing. This hits Kicis hard as he struggles to apply his knowledge of history in deciphering what the future of humanity holds with its picture-taking and social media obsessions – including his own. Meanwhile, Anna ditched law to become a travel photographer, and stumbles to find her path. The two of them collide and face these untimely circumstances head on, together.

Enter the tech gurus, Giovanni Rube, Reg Wotley, and the elusive Developer X while enlisting the brawn and the connections of the aging Routhles Smarza to solve the problem before it’s too late. This group of unsuspecting renegades take a stand against an evil AI and the corporate backers that obliviously want it to keep growing. Has a tipping point been reached within the bounds of Earth’s physical constraints, exploited by forces larger than life, or is it simply the beginning of the Datapocalypse?

A duology on AI given too much control while humans feed their insatiable social media appetites . The Datapocalypse series is a poetic attempt to meld science-fiction, international-intrigue, comedy and romance into a fierce exaggeration of our destiny. Or is it?